As a neuroscientist it has been indoctrinated into me that context can affect how well information is retrieved. It seems like an abstract concept sometimes when we discuss it professionally – remote from what affects us personally day-to-day. Interestingly for me, moving to Paris has really made this very concrete right now.

As a scientist I have been very fortunate to travel as part of my job. This has also fed my interest in photography for many, many years. I have been fortunate to come to Paris a number of times now & never ever tire of the city. So needless to say I have also taken literally thousands of photos here. If I shoot a couple of hundred photos in a day, then I will typically discard about 90% of them – after reviewing them at the end of the day. Of those 10% that are left, only very rarely is there a photo I would consider submitting to a juried show or putting in an exhibition. Interestingly, some of my favorite black & white shots are of Paris and France. I have included some of these in this post. 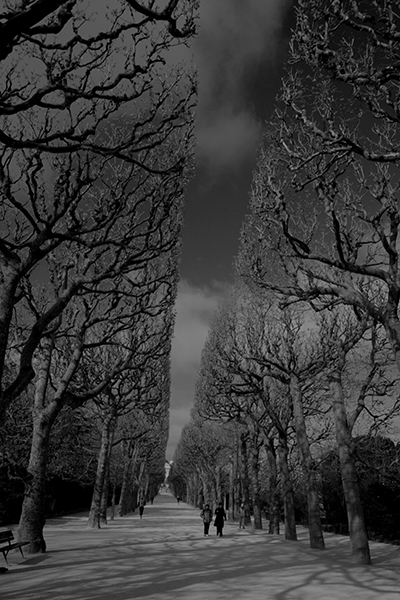 As I have been walking around Paris, I was struck by the number of times I remembered specific instances when I had taken particular photos. I remembered clearly the weather at the time, what mood I was in, and where the best place to stand was for taking the shot, and of course what the light was like. These very vivid visual memories were triggered by the scene unfolding around me while I was walking.  This happened to me the first day I went to the ICM on the Boulevard de l’Hôpital  – I was thinking about neuroscience and not photography as I was ambling along. Indeed, the 2 pics directly below were taken very close to the main entrance of the Salpêtrière on the Boulevard de l’Hôpital, many years ago now.

That night when I got back to my apartment I thought about this further. Memories from travel to other locations in France also came back, with very concrete details, as I looked back at some of my favorite photos on my laptop. These are things I have not thought about for at least decade or two – indeed, I was surprised to even remember them.

So being in France again, seeing the sights has re-activated memories that I had forgotten that I had. And these triggers are not only visual…

About 10 years ago, I was on a PhD committee for my Parisian colleague’s student. I came to Paris for the thesis defense & unfortunately my luggage took a wayward turn at Heathrow & did not make it to Paris with me. I arrived in the evening & the thesis defense was in the early afternoon. So the next morning there was no alternative but to ‘shop until I dropped’ in the Printemps department store at Place d’Italie, with my colleague in tow as my style consultant. We took no prisoners & were done in 2 hours – literally had to buy everything including shoes. As I was walking with her to the thesis defense [fully dressed & looking spiffing] it was raining cats and dogs. Ever wanting to improve my French I asked her what the equivalent expression was in French. With an evil look in her eye she said there are 2 ways of saying it. You could say: ‘Il pleut des cordes‘, which means that it literally is raining ropes. Or you could say: ‘Il pleut comme une vache qui pisse.’ She was about to translate, but stopped because at that point I was falling about laughing so hard I actually cried. I am not going to translate it for you either! :)))

Funnily enough, this same subject actually came up the other day. We were meeting together with a younger colleague & after the meeting we started discussing French language skills. She was clearly chuffed that I could still recall these expressions after 10 years. Our younger colleague was rather surprised, to put it mildly!

So the existing context [in our multisensory world] clearly affects our ability to retrieve memories. But the presence of strong emotions also helps lay them down effectively in the first place. So what is the moral of the story? If you really want to remember something well after 10 years or so, you need to first laugh until you cry :)))