In my last post I enthused about my domestic arrangements & surroundings. This time I thought I would share some ruminations on my professional environment. I think that it is always interesting to change how one does things, and what better way to do that than by moving to a different country where people speak a different language. So what is similar about people across cultures?

I thought about this question one day this week when I had an amusing experience interacting with an IT person at the ICM. He was helping me get my laptop onto the network & making sure that it would not be a security risk for the institution. He speaks English worse than I speak French, so you can imagine the fun we had in communicating with one another about procedures, software installation etc. Add to it the fact that I had gone to work without my glasses. Yes, indeed. I have 2 pairs of them & both were in my apartment. I have never ever done that before. So there I was sitting about 4 feet away from my laptop as he was showing me things on it. He thought it was really funny. Undaunted, we pressed on & were able to solve everything just fine. Neither of us seemed particularly perturbed about looking for words – Plan B was always the other language & Plan C: resorting to franglais. I also ended up learning new technical terms in French & turns out many of them are English words. It is interesting that so many interactions here on the science front involve Plan C – people will switch languages to make something easier to say, even in meetings. It also happens with email and I am doing this also. [Actually, this seems completely normal to me – as a kid I grew up in a household that spoke Latvian & English.]

The second thing that amused me about this experience is that I went upstairs afterwards & was telling my collaborator about forgetting my glasses. She smiled knowingly at me. Turns out that she keeps several pairs in her office – just in case she would do something like me. So people are the same the world over – I have friends in the USA and Australia who also keep multiple pairs of glasses around in case they should misplace one pair! And guess what? Her optical prescription is identical to mine! How cool is that? So my vision problem was instantly solved in the lab. So now I have a Plan B should I ever forget to bring my glasses again – we put a spare pair of her glasses on my desk (see red circle) where we can both reach them! Actually reading was not the real problem – it was typing because my arms are not anywhere long enough to reach the keyboard! 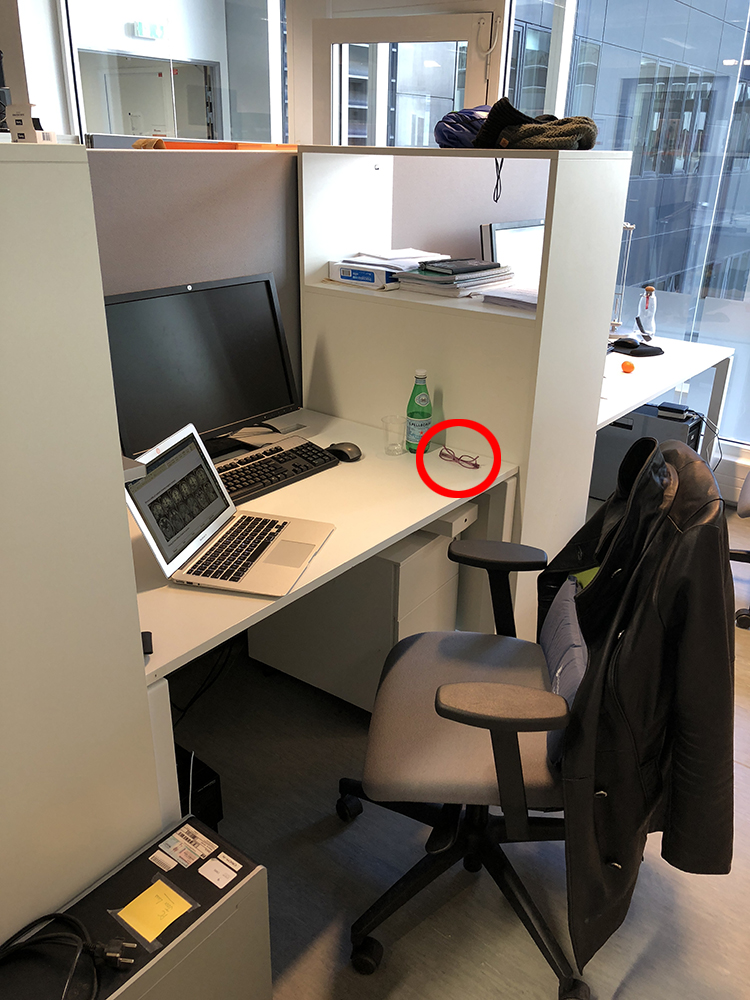 But I digress. Back to the question I asked earlier. In my opinion, IT people are really the same the world over – it matters not what language they speak. My face-to-face interactions with them have always been great. They are incredibly helpful & try to make your life easier & they have a certain geekiness that I can personally relate to…

It seems to me that clinicians are also the same the world over. Always looking rushed. Answering their ringing cell phone during a meeting. Trying to give patients the best care they can with a finite set of resources – such as being involved with researchers trying to gain new knowledge about brain function & underlying connectivity.

And as people age, they are also the same the world over – forgetting where they leave their glasses seems like a universal past time for those of us who are old enough to know better. [One of my pairs of glasses actually has a neck chain… And I confess: I do keep a spare pair in my car back home…]

What is the same or different in Paris now, relative to when I have been here before? The last time I was here was 10 years ago, with other trips spanning back into a second decade. So here are a few quick observations:

1. The croissants & pain au chocolat seem so much bigger than I remember them. I used to buy 2 of them for breakfast with coffee. When I bought croissants on the weekend, I only bought one for breakfast – it was much larger than I remembered & kept me going until lunchtime. See pic below for a 21st century croissant – at least as obtainable in the bakeries around me. Seems like the supersizing craze has also occurred here…

2. One sees the odd vending machine storefront here & there – a place where food, beverages & condoms are provided 24/7. I wonder how often the items are restocked [if not sold], as much of the produce is perishable. [This reminded me a bit of Japan where an amazing array of food items can be bought – all artistically & wonderfully packaged in the Japanese style.] Last year I heard a news story about a couple of fishmongers who had started a vending machine for oysters at their store in a town in Brittany – so that their customers could have fresh oysters after hours! Would you buy oysters that way?

1. The pigeons are definitely the same. Always wandering in front of you, heads bobbing. Or perching on a statue of someone important. I saw one particularly rotund one feasting on the remains of a baguette the other morning as I walked to work. The next morning he was breakfasting with friends. 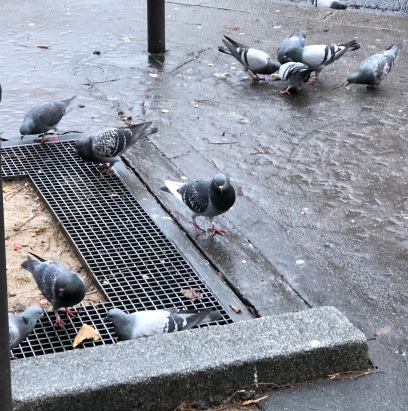 2. The other thing that has not changed is that people walking their dogs do not pick up after them… always need to watch where you are stepping – luckily I do not need my glasses for that!

3. Lots of people still smoke on the street as they walk to & from work – that is something that you will not see much in the USA or in Australia. Actually someone was vaping in a meeting the other day – first time I had seen that anywhere.

4. Parisians remain very well dressed & stylish, irrespective of whether they are younger people going to work, or if they are older and retired. The latter look fabulous when taking their promenade to go lunch, or when shopping at the farmer’s market.

In future posts, I will return to these same/different questions when there is something more to wax lyrical about.