I still have a couple more posts on my Paris experience – here is one of them. 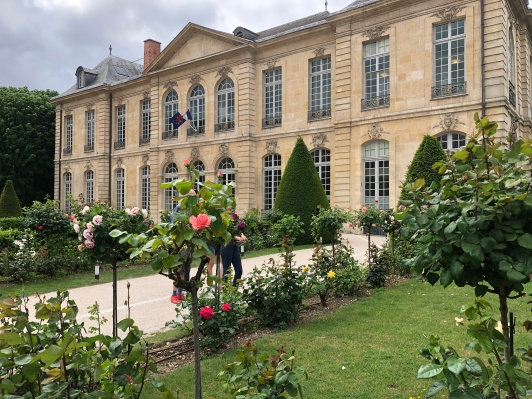 In every field of endeavor there will always be those who show exceptional skill at a particular activity. But quite rare is the individual who has mastery of multiple fields of expertise. In my wanderings around Paris I have had the opportunity to visit the respective museums devoted to Rodin [1840-1917] [Musée Rodin] & Picasso [1881-1973] [Musée National de Picasso-Paris] – two individuals who seemed to find success at whatever genre of art, sculpture or ceramics they turned their attention to. I had never visited these museums on previous visits to Paris, so these were definitely on my list of things to do – especially before the tourist season peaked here. 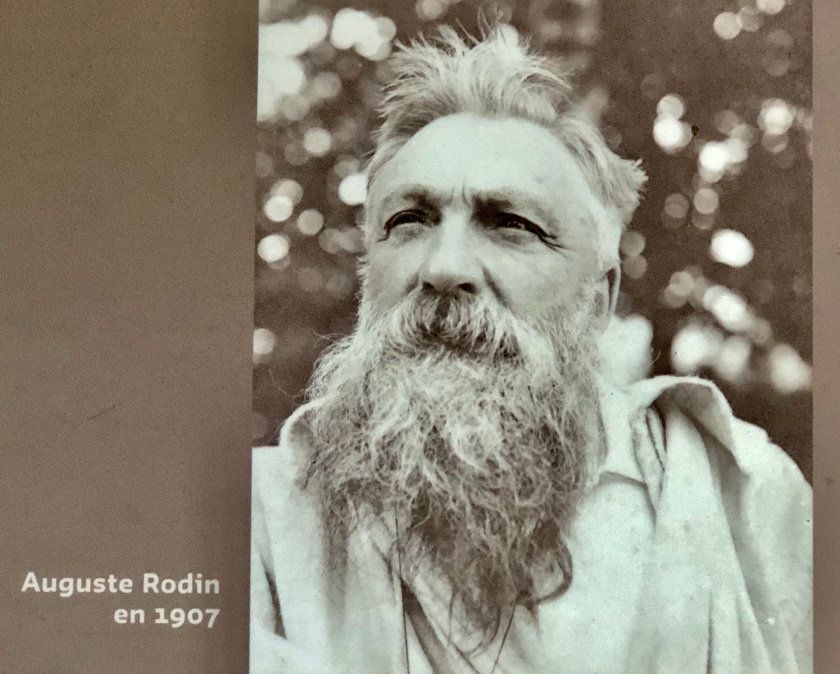 The Rodin Museum itself is housed in a magnificent building, which was built between 1827-1837 by a wealthy financier [Abraham Peyrenc de Moras]. Unfortunately, de Moras passed away before construction was finished. de Moras’s widow lived there until 1853, when she sold the place to Louis-Antoine de Gontaut-Biron. The place is still known as l’Hôtel Biron.  It changed hands & purposes over the course of the years, but in the early 20th century it was the place to be renting space if you were an artist or writer. Matisse hung out there as well. Rodin ended up renting 4 rooms there on the ground floor where he was able to also have his studio. Interestingly, in 1911 the place was sold to the state to be repurposed. All the tenants left, with the exception of Rodin… He offered his collection of works to the state for the purpose of having them kept in one place to help train artists & sculpturs, with the idea that eventually [on his passing] it would become a Museum devoted to his work. In 1916, the state agreed & the place became the Musee Rodin in 1919. [Rodin died in 1917. For more information on the history behind the museum, see http://www.musee-rodin.fr/] The building is gorgeous, as are the gardens where a lot of Rodin’s larger sculptures are housed. 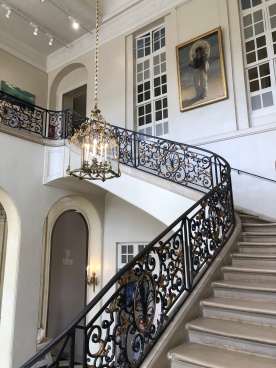 His most well known works are Le Penseur [The Thinker] & of course his sculpture of Balzac wearing the dressing gown in which he would apparently always write in.

Rodin did a number of studies of Balzac in plaster – no doubt planning this monumental work over time. One of them was a nude, which is displayed inside in the museum. Another was a plaster model of a dressing gown. Mercifully for us all, he chose to clothe Balzac for his magnum opus! This statue of Balzac has been reproduced & displayed in so many galleries around the world. I remember as a child begin dragged along by my parents to the National Gallery of Victoria in Melbourne, Australia where there was a reproduction of it. It was quite dark & evil looking, as I recall it. The work displayed in Paris of it does not look anywhere near as sinister. Interestingly, the closest Metro stop to the Rodin Museum in Paris, Varennes, also has a couple of larger than life renditions of these works. Another nice bit of whimsy [not unlike the Metro stop Arts & Métiers I mentioned in an earlier blog post.]

The museum features many examples of his working models in plaster & there is a really informative video of the many steps in the process of making a bronze statue, from the initial plaster model, the ceramic mould, etc. 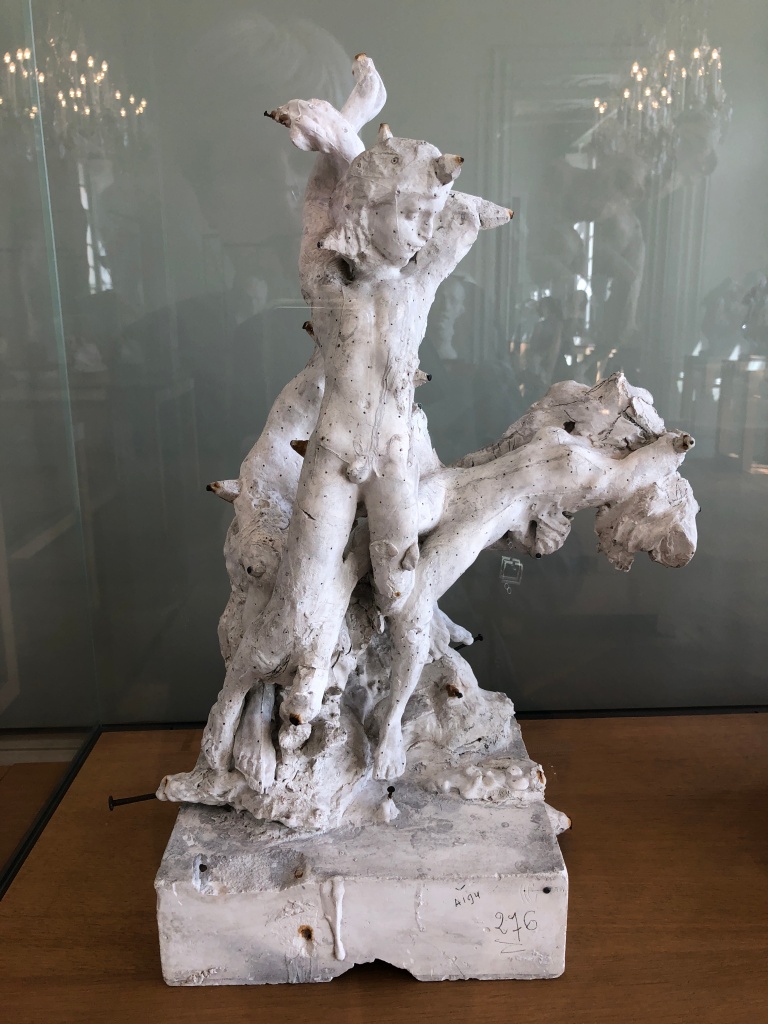 One of the most amazing works by Rodin, for me at least, is La Porte D’Enfer [The Gates of Hell]. Rodin took his inspiration for this work from Dante’s Inferno. It is absolutely enormous – it is 6 metres high & 4 metres wide! It has a total of 180 figures! To design & fabricate such a work requires not only excellent artistic skills, but also incredible spatial ability. It looks like Rodin started out with a really small model [less than 1 m high, image below left] & worked his way up to the real thing [image below right shows some of the detail from this monumental work]…

…in any case it took him 37 years to complete it. Le Penseur also features in it & can be seen in the image above. Needless to say, that this work of Rodin has been reproduced & displayed many times around the world.

As I mentioned earlier, Rodin seem to master any technique he touched. Here is a wonderful side-by-side study of his father, Jean-Baptiste Rodin. At left below is a bronze bust & at right is an oil on canvas portrait.

There are also examples of works in terracotta, faience, carvings in marble, as well as sketches for works. Plaster models of faces, hands are also abundant. The museum is great in that regard because it shows works in the various steps that make up the artistic process of creating beautiful sculptures.

As a feminist, it would be remiss of me not to discuss Camille Claudel, Rodin’s muse of many years, but more to the point a wonderful sculptor in her own right. The museum features some of her works as well. Here are 2 exhibits that I liked the best: The image at left below shows a carving in onyx with bronze trimmings called Les Caussesses [The Gossips]. The details is gorgeous & it took her years to finish this group of 4 nudes [1893-1905] because apparently onyx is so difficult to carve – it is both very fragile but quite hard as well. The image at right below shows her bronze bust of Rodin [1886-1892]. 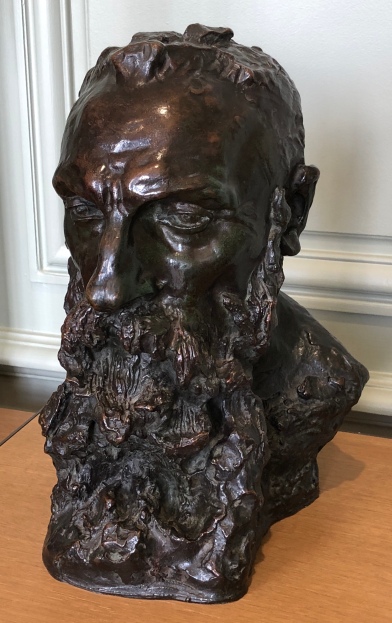 She was also accomplished at working with plaster, clay & in marble, the museum shows various examples of her talents.

Camille Claudel has her own museum [Musée Camille Claudel] which is located in the town of Nogent-sur-Seine ~100 km southeast of Paris [http://www.museecamilleclaudel.fr/] This has been on my list of things to do, but with the 3+ month long train strike in France, it has sometimes been tricky to travel as train schedules are disrupted for a couple of days every 4-5 days. So as a consolation prize for now, I bought a book on Camille Claudel, in French, at the museum.

The Musée Rodin is a great place to visit at any time of year – lots of nice views of city landmarks from the gardens, not to mention Rodin’s sculptures in the garden, as well as in the stately home itself… 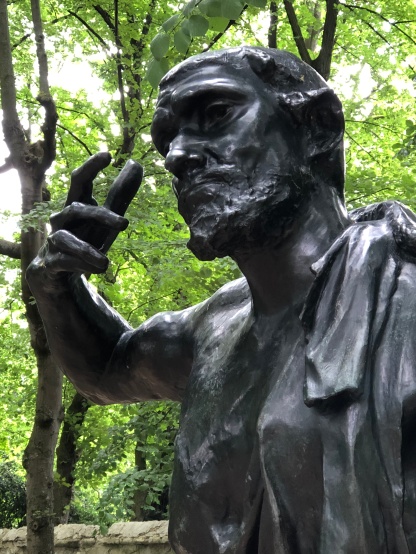