In an earlier post I mentioned Antonio Damasio’s latest book – The Strange Order of Things. I have nearly finished reading it. During these months it has stimulated me to contemplate the nature of feelings & emotions & their importance for human primates. Recently, coincidentally, I have also found myself in a few situations where I have had to watch the emotions of others spilling out with potentially unsavory consequences:

In the case of the first two situations, these were private affairs between individuals that unfortunately played out in a public space. When emotions run this high usually there is not much thought about the impact of one’s actions on others. In the third case, the collective emotions of a crowd were displayed, united by one cause. In all cases the situation has an element of unpredictability . How it ultimately plays out can also be influenced by the [in]actions of bystanders.

1. Anger exploding to boiling point: One Saturday afternoon my other half & I were having lunch in my favorite brasserie (image below) in the Butte-Aux-Cailles neighborhood. 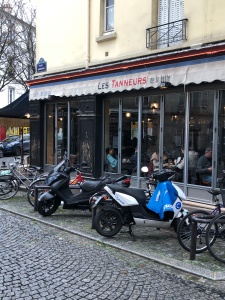 As we were finishing our coffees we noticed two men emerge from one of the businesses across the street, with the larger one starting to shove & punch the other one. The scuffle continued as they made their way into an apartment building next door. Then we saw a pair of legs on the ground through the glass door of the apartment building’s front door. At that same time one of the waiters from a restaurant next to ours rushed across the street to help out. What to do? As my other half went to pay for the meal, I stood & watched to see if the situation would escalate – and if I should call the Police. Thankfully, it looked like things had settled down – the big burly guy emerged from the apartment building. He saw me standing & watching inside. He made a very aggressive gesture at me – basically the equivalent of “what the hell do you think you are looking at”? The head & body went forward with eyes bulging, the arms went out to the sides in a ballistic manner. He was still clearly angry & wanted to take it out on someone/something… What to do? I made a non-confrontational gesture back – in slow motion & in a non-aggressive manner.  I spread my arms out, pointed my palms to him, put my head to one side & arched my body back a bit – to non-verbally say “whaaaaaat are you doing?”. Then I turned my back & walked over to the counter to the servers hoping that this had defused the situation. Sure enough. Nothing further happened. That said though, I figured that the servers would literally have my back – they would see if he was coming across the street to harm me. I told them what I had seen happen. They did not look particularly perturbed & actually rolled their eyes – it seems like this guy is a bit of a hot head, so there clear is a history to this. Apparently, he owns the business across the road. Note to self: do not go & spend any money there & aid his business…

2. The bitter end to a relationship: One morning before work I realized that I had no bread: necessitating a quick dash to the boulangerie across the road! As I walked down the stairs I could hear a very loud & angry conversation in one of the corridors. I could hear it on the 5th floor already. Turns out it was all on in the ground floor corridor – the main corridor leading out of the building. 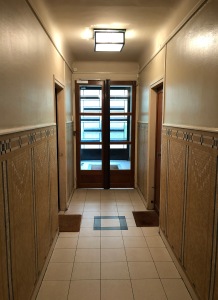 A fellow was having an argument with his ex. Why ex, you ask? Because her clothing & belongings were strewn all over the floor in the corridor – the corridor that all of us have to walk through everyday. I did not say anything as I had to step over her stuff & also had to literally walk between them – there was nowhere else to go. Made me feel pretty uncomfortable, but they continued their argument unfazed. As I walked out of the building I was pinned down by the Gardienne who told me not to worry because the Police had been called. Yikes!

When I came back from the bakery, they & the belongings were no longer there. As I ate my croissant upstairs though, I could hear shouting in the street as the argument started up again. Then later as I went to work, I was dreading having to go thru that corridor again, but there was no-one there this time. Outside the building her belongings etc. had been neatly stacked next to the front door.  I wondered about her all day & whether she find somewhere else to go. The belongings were gone at the end of the day…

3. Emotional contagion & crowds: When we are in group or crowds we can be spurred on by others & our positive or negative emotions can be magnified those around us. Sporting events & protest marches are good examples where this can happen – where one ‘in-group’ confronts another – symbolically in sport, but literally in a protest march.

I was walking home from work one night I was struck by the number of people in the street. They were carrying signs & clearly were either going to (I thought), or coming from a protest march. As I walked further along the Boulevard de L’H’hôpital I realized that there was actually no traffic on that street – only loads of police vans with police with riot gear etc. That said, they did not look particularly perturbed  – they were just chilling out near their vans with their colleagues. I walked on to the large roundabout at Place D’Italie – a major roundabout where 7 streets come together. The traffic is always chaotic there at any time of day: cars, buses & scooters taking seemingly random lanes, yet somehow always making it through the intersection safely. The same can be said for pedestrians – I negotiate this roundabout twice a day because I live on one of it’s feeder streets. I am making sure I will not get mowed down as I listen to a podcasts. The image below does not really show the chaos, but hopefully you get an idea of the scale of it.

That day, however, the roundabout was completely clear of traffic! All the streets to the roundabout had been blocked off. Even though the protest was over, there were a large number of people still milling around in the roundabout with their signs, flags & other symbols of protest – even deckchairs! When I got to my street I was surprised to see that it was being used as a staging area by the Police. But again, no-one looked particularly perturbed, they were just hanging out chatting with each other. 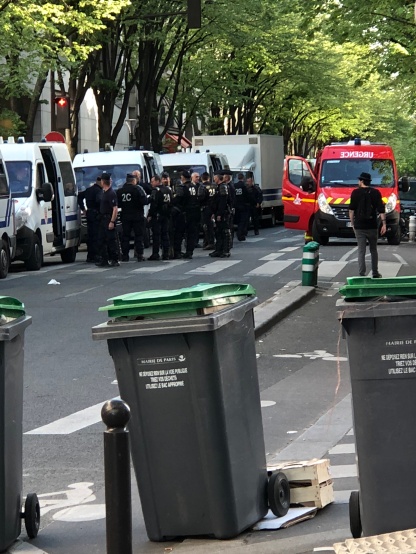 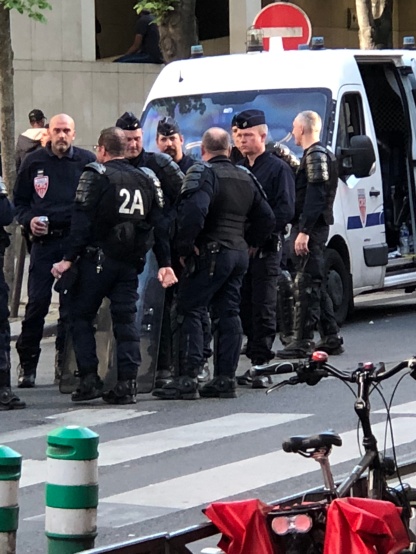 Where was I during all of this? I asked someone about what was going on & was told that the march was definitely over. So I decided get some sushi at my favorite Japanese restaurant – a stone’s throw [pun intended] from the roundabout. So, here I am tucking into a nice sushi dinner watching Paris’s finest when I notice they start suiting up into their riot gear… uh oh… 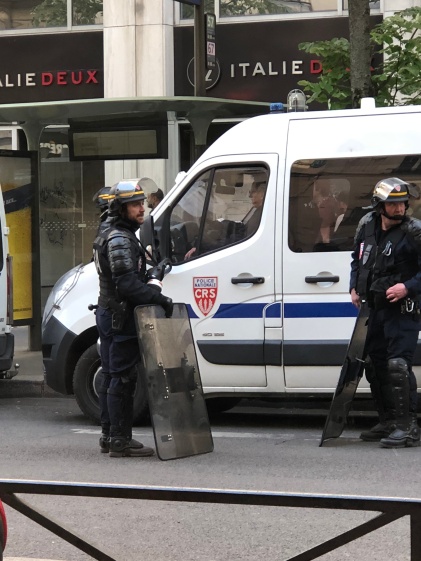 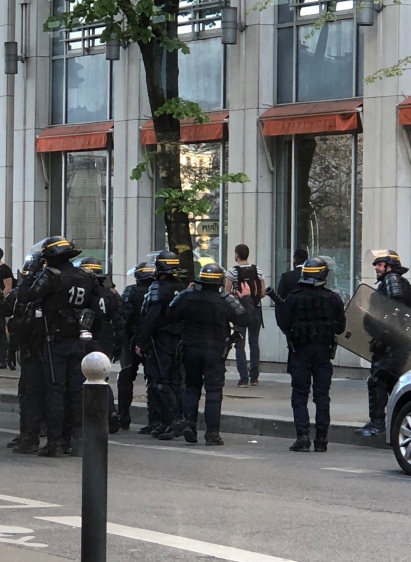 …& then they all marched off towards the roundabout with their hard hats, batons & shields!

There was a lot of whistling & yelling for a bit by the detritus of the march. That said, motorists, motor cyclists & bus drivers were not impressed either – looked like they had been stuck waiting to pass through the roundabout for some time – it was peak hour traffic time around 7:30 pm or so. There was also a convoy of buses in our street going nowhere… The Police went over to open the roundabout up to allow traffic to circulate again. And it did.

In the end I had to wonder about how much role-playing/ritual was also going on that day. I say that partly because of conversations I have had with locals. Perhaps I am also cynical – but I did not get an overwhelming sense of really negative energy from the crowd: they had been able to have their protest & make their point. Indeed before long the Police came back to their vans & they did not particularly stressed & perturbed either. 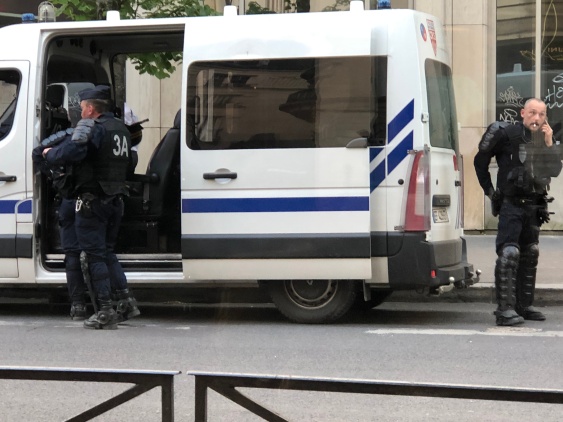 In fact, after they took off their riot gear they hung out & chilled – some on cell phones smoking cigarettes, others vaping. Then they packed up & drove off. And at that point I had finished my sushi & also went home with now normal traffic in our street.

Even though the remnants of the crowd had made a lot of noise, it seemed to me that they did not really want an encounter with police in riot gear. Similarly, the police also had no interest in a confrontation either. Why? Might be because they are literally neighbors. The 13th arr. headquarters of the C.F.G. – the amalgamated set of unions who organized the protest in response to some of Macron’s reforms – is literally across the road from the 13th arr. Hotel de Police [headquarters]! 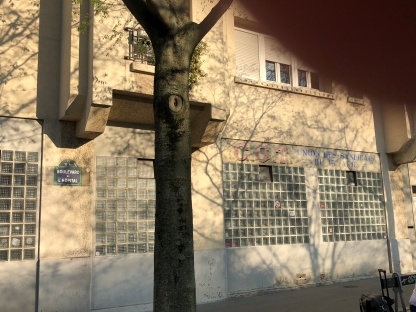 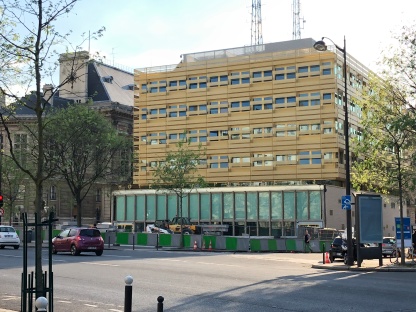 So what did I learn from these three recent situations ? A couple of things: A. You realize that you are potentially quite vulnerable when you are not totally fluent in the local language when things like this happen. Happily, I have enough command of the language to ask someone what is going on… B. A situation where a person, or people, is/are very upset can turn on a dime – it can do so because of what others do or how they react. In the case of the first situation I was able to defuse it with a non-verbal gesture & in the second case, the best thing to do was to remain silent & go past & let it be. In the third case, the Police as a group had to show emotional intelligence & disperse a group of remaining protesters in a way which would not escalate the situation. This is a very difficult thing to do.

So how do we read the collective emotions of groups & crowds? We don’t really know. I thought a lot about my experience & how I gleaned information from the crowd. Somewhat ironically, this is a new area of research in my lab…

Postscript: We have also had student blockades of a number of universities in France in response to reforms announced by Emmanuel Macron. This also includes an institution of higher learning just near me [site du Tolbiac de l’université Panthéon-Sorbonne], where students had barricaded themselves in a building for 3 weeks & prior to that had been rioting & throwing projectiles at Police. Apparently, the Police stormed the building one morning at 5 am & took control of it by 6 am. Funny thing was, I heard none of this, despite the windows in my apartment being wide open since we are in the middle of a heat wave… Go figure.

There is never a dull moment here. I had forgotten what it is like to live in a big city again…

Postscript 02 MAY 2018: One of yesterday’s May Day marches here in Paris turned very ugly – with hundreds of people being arrested. There was a confrontation with riot police on the Pont Austerlitz & a McDonald’s restaurant was completely destroyed & cars were damaged [within a [cobblestone’s throw from our hospital]. From the reports on the nightly news & the newspaper stories this time it appears that a certain faction of the crowd were out for violence – marring the day for all of those people who wished to march peacefully. [http://www.lemonde.fr/societe/article/2018/05/01/1er-mai-le-defile-parisien-perturbe-par-une-serie-de-violences-200-black-blocs-interpelles_5293042_3224.html]

Where were we during all of this? Fortunately, we were not at work – May 1st is a public holiday in France. 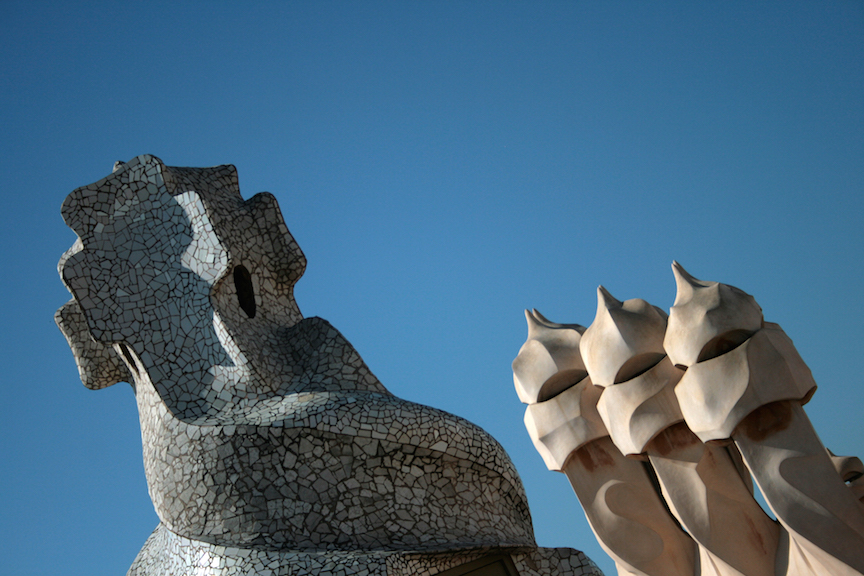